Brian Ray is a great person, great musician, guitarist, bassist, singer–songwriter and musical director, is rhythm, lead and bass guitarist with Paul McCartney many years ago…he has worked with an extensive list of artists in addition to his own solo career with The Bayonets…thank you Brian!

BEATLES MAGAZINE: Your first contact with the music was at the age of 9 years old , you saw the Beatles on the Ed Sullivan show and you witnessed Beatlemania . How do you remember that ?

BRIAN RAY: Well , you know, I just remember hearing the songs on the radio and recognizing that there was a different sound that anything I was used to. And I was very in the music from the very young age, from 3 or 4  age already . but when the Beatles came , it was a sort of a combination of all of the coolest things I ever heard before mixed together by a band of brothers who were the same age , so when I  – roughly the same age  – . When I tuned into the television show – the Ed Sullivan show – that night like so many people in the world did , I was transported into a dream world and I’ve never woken up from that dream world .
When the Beatles arrived you really had this feeling that these 4 guys are a unit and they decide what they sound like . They sounded so vital and different and I was taken and I’ve never waken up of it . Thanks God !

BM: Many musicians dream of playing with Paul McCartney . Did you ever imagine you would be there in a band with Paul ?

BR: Well you know , when I was young I would dream about being succesful , succesful in music  . I guess for me I had dreams and I always believe I was meant to do something bigger than even my imagination . I didn’t think : “The Beatles ” , because they are sort of Gods and they were a band , so I never really thought about Paul is the solo artist that I will play with him one day , but I always saw myself doing something big . I didn’t know what , but it´s a kind of thing you can’t even admit to your friends , because it sounds ridiculous . It sounds like – you know – they laughing at you , so I didn’t want to admit it loud , but yes ,  I thought something is gonna happen .

BM: What is like to be there with Paul and to work with him ?
BR: You know , Paul is , before anything else , he’s a man , he’s a family man , he’s a father , he’s a friend , a kind hardy man , so you start with that first and then you hear his catalogue of music and his ability that still play all of the songs he wrote 50 years ago , the ability to still write songs, so you feel like you’re really doing something special , not because he’s a superstar , but because he’s a super talent and a pretty super person , so you know , it’s a gift that  I can even quantify . It’s a gift !
BM: What do you like more from Paul  ?
BR: Musically , what I like more ?  I don’t know , it’s hard to say . I like rock and I like his work. So I like everything from Queenie eye – New to And I love her to Helter Skelter . Think of the dynamics that he can employ as a singer , as a songwriter and as a musician . You can’t name no one in the planet that can do those 3 things and with so much diversity and variety . There’s no one else . Think about . There are great singers , there are great writers , there are great musicians , but how many of them do all 3 and then do it from And I love her to helter Skelter . I can’t name one  . No one ! 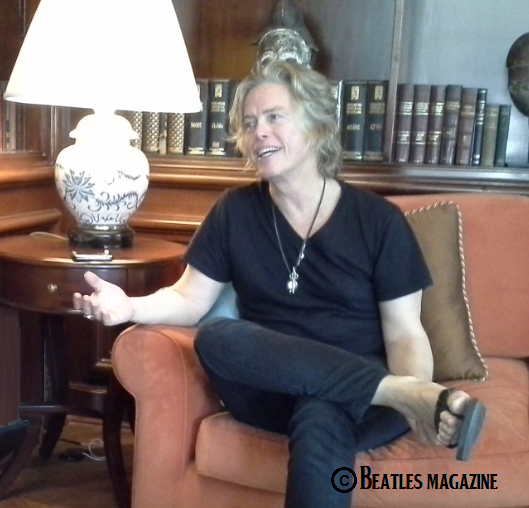 BM: What do you like more when you are not on tour or when you are home ?
BR: When I’m home I really like a life style, I like the ocean. And I enjoy the company of my friends , my family . My parents are getting older now , so I’m treasuring my time with them and I behave me like a good son and they need me. I have a very simple life, I like unplugged , I have a lovely home with the ocean view , I like to do what I like , have nice meals with nice friends , read a little bit , bycicling on the beach on  ( White Palm ) , walk my dog , and hang out with who I love . It’s pretty simple !
BM: Charlie!…the lovely Charlie!
BR: Oh , Charlie ! It’s the sweetest dog! and I also collect vintage guitars and I like vintage american cars . So I have a few hobbies , yeah  !
BM: Brian tell me more about  THE  BAYONETS on ROBO RECORDS . When will the new material be released ? What´s the title of this new  album ?
BR: Well , I have a friend called Rob who has been a supporter of my solo music for 10 years , really since 2005 – almost 10 years – he was guiding me then way back , he helped me with the physical release of THIS WAY UP , my second solo album , did some advicing and some assistance. Now The Bayonets had a first song last year , and I played him  “SUCKER FOR LOVE” and “SMARTPHONE” – first 2 singles, a success on the radio.  The title of the new album is Crash , boom , bang
BM: Is the new album totally different from MONDO MAGNET or THIS WAY UP ?
BR: Yeah , it’s very different ! You know , the Bayonets is a partnership between myself and Oliver, who’s a really good songwriter and producer in his own right . He’s been working for , you know , 30 years in his own field doing Pop …. beat music for people like …. Adam lambert ,…. Rod Stewart , ….. Paula Abdul…   He is a very , very strong talent , so our music takes a different angle in my solo stuff . Oliver also wrote with me my solo material . He wrote 4 , 5 songs in my first 2 records.
BM: How do you  write the songs with Oliver ?
BR: Well , with Oliver – like any songwriter – it starts with one of us having the beginning of an idea , wether it’s a title or a guitar lick or a melody or sometimes close to a whole song almost finished .
BM: Is there any method of writing songs together ?
BR: Well , I usually doing most of the chords and the melody and hearing the arrangements in my head , off the pallet of sound, and Oliver – he’s an incredibly lyricist – so usually , say 8 times out of 10 , Oliver writing the lyrics  – kind of bubbling in his head , I throw a line , he’ll write a line and I throw a line and he’ll improve that line and so it’s a great partnership , we really have a lot of fun laughing . And in a couple of songs he came to me with the start of the song . “SUCKER FOR LOVE” was his beginning and a new song called “WOODO DOG” on the new record was his beginning and then I finished it.
BM: Any future plans for the Bayonets this year , or in 2015 ?  Will be there any tours?

BR: Yeah , I hope to do a record release party , ’cause the album released following on Robo records in July , I make the date clear later, but are 10 newest songs, 10 songs , 5 from last year …This July , coming soon !

BM: Thank you so much dear Brian
BR: Thank you, thank you Beatles Magazine is a great place to turn for the latest news on the world´s greatest band! 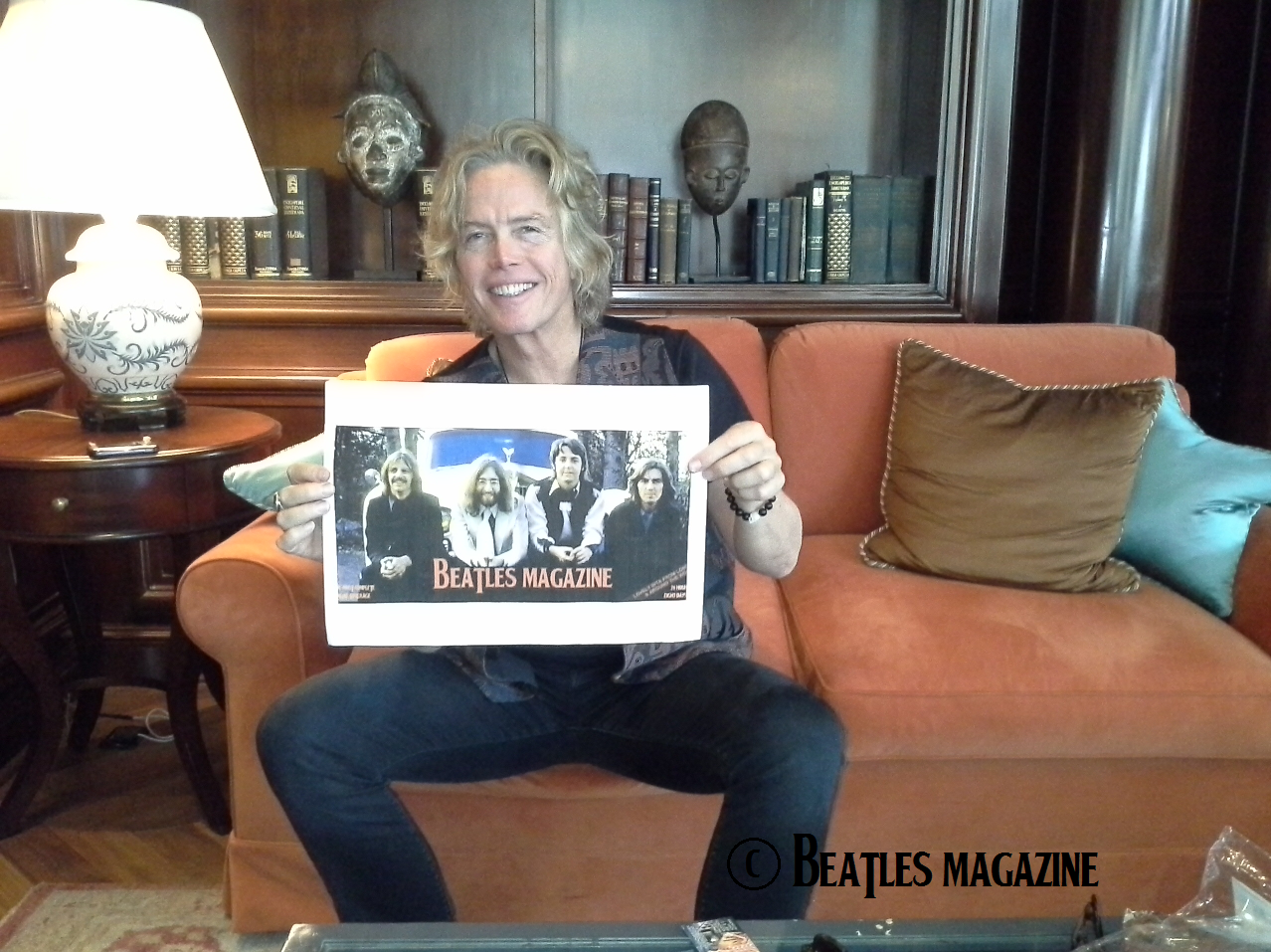 Here a message to Beatles Magazine followers all over the world: