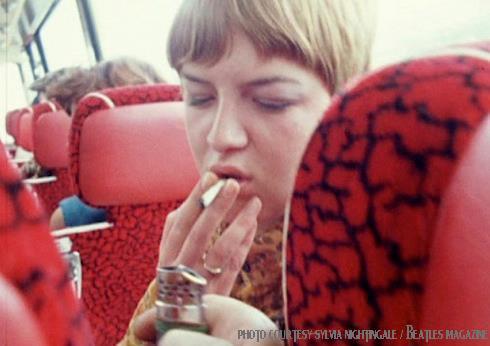 BEATLES MAGAZINE: Sylvia, when was your first contact with The Beatles, you were a fan of them before “Magical Mystery Tour“?
Sylvia: Yes, I was a fan from the age of 14 when ’Love me Do’ was released  and then when I was 17, I became Area Secretary for the Fan club for West Sussex
BM: How you become part of MMT film?

BM: To which of the four beatles you came to know more?

S: Paul, because he was my favourite….although I like them all!
BM: The review of the film was not very good in 1967. What did you think of the final product?

S: It was different, but very misunderstood and was ahead of it’s time!  In 1967, I was simply proud to be part of it and didn’t care what the reviews were like!!

BM: Remember any anecdote while participating in the filming?

S: Paul was asked by the press, what it was about and he said “ It is a mystery, to me!”

BM: How long were you filming (your character)? and in what city was your involvement?

S: I was simply a member of the coach and the filming was done mainly in Newquay, Cornwall 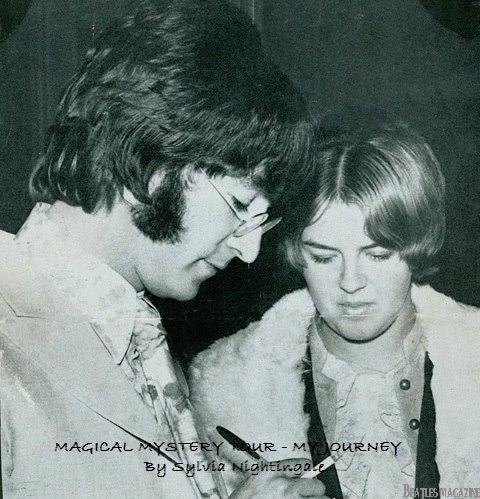 BM: Did you have contact with any of The Beatles, time after the filming?
S: Yes, at the recording studios in Abbey Road and at the preview of MMT in Dec 1967 and then at the fancy dress party they gave for all the cast and Area Secretaries in London in Dec 1967
BM: Have passed 45 years since you were part of history. you feel to have been part of something so big as to be next to this fabulous group?

S: Yes, it was a wonderful experience and I was very proud to be part of it and share those two weeks with the Fab Four

BM: 1967 was a very important and interesting year for The Beatles. Sylvia Tell me what you remember most about all this great personal experience?

S: I remember how relaxed they made us all feel and how much fun it all was, as each day was something different. The music of 1967, was a different direction for them and was a sign of the times
BM: Next year will publish a book about this experience in the film, how to be titled? can you give us a preview of this?

S: The book will be called ‘Magical Mystery Tour – My Journey by Sylvia Nightingale………It will span 50 years of my life from when I became a fan at 14, through the MMT experience and then up to 2012, and the release of the re-mastered MMT and my meeting Paul again at the Gala Screening. It will not only be about my experience on MMT it will be about the impact their music had on my life throughout those years.

The Beatles to me were four nice lads with a unique musical talent who created a phenomenon that shook the world. They have stood the test of time and still have fans all over the world to this very day, of all ages. I was one of the lucky ones, I got to not only meet them, but share the making of Magical Mystery Tour and I will always treasure that…..
I send greetings to all the readers of the Beatles Magazine and continue to enjoy your Beatles music!!

The interview was in Ireland. Julia Baird talking about the social networks, her website, about his book, future projects and – of course – John…

Julia, first of all I would like to thank you for this time you are giving me to talk a little bit about you, about John and about your future projects.

BEATLES MAGAZINE: Julia, last year you created your own website and so this way you are getting closer with fans on social networks- How do you feel about this?

Julia Baird: Well, the website was created for me!!!! I wouldn’t know where to start!…mal Holmes, of OMD, is a friend…and he created it…then another friend set me up on FB…this all happened last September—October…and then I worked out how to do Twitter myself…although I haven’t actually used it much yet. It’s good thing, because I get to know what the fans are up to!!!!…and thinking, a bit…and I can return that…I am still amazed when I see some of the phots…copyright!!! what IS that?????? How the world has changed in the last ten years!
BM: Your book “The Private John 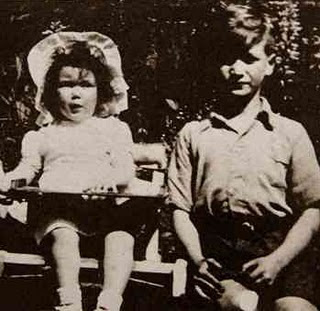 Lennon” ( USA)/ “Imagine This” (England) it´s wonderful, moving, very direct and very well written. In this book you tell us about John’s childhood. Julia could you please tell me which is the most special recollection you have from John?
Julia Baird: For recollections of John’s childhood..and where it touched mne…you really have to read the book..otheriwise I’ll end up re-writing it here….he was a normal brother to two small sisters…he played with us, babysat for us, collected us from school sometimes, drew pictures for us, just like our Mother did…helped me to learn my maths tables…repetition…and rewarded me with big swings…read us…me and Jackie, stories….tossed us around…it’s all in the book… BM: When was the last time you had contact with John?
Julia Baird: We last saw John in 1968…the year I got married and moved to Ireland for the first time…he re-established phone contact himself in 1974…and we maintained that until just before he died..and we wrote letters..
BM : What are your future projects?
Julia Baird: Future projects???? I do some voluntary fundrasing for Medicos Sin Fronteras…of a Beatles nature…we put on concerts, make cd’s all the proceeds…and I do mean ALL…go straight to buy medicines for children in 3rd world countries….I must tell you that the cd, put out last year sold out completely…and that Yoko took part too, to help sell it…
BM: Once again, I would like to thank you for this time Julia.
Julia Baird: I hope this is nearly what you want, Lovely Rita!!!!!!!!, and I like Beatles magazine…it feeds the fans who feed the magazine..that can only be a good thing!!!
BM: Ooh, Thank you so much Julia!.