More than 17,000 folks of all ages who crammed into every available seat in the downtown Tampa arena on Monday night to sing along and be taken down that magical mystery tour of Paul’s life in music. And when Paul sings, people listen. And they remember. And they feel. And they react.
A three-hour journey that touched on the earliest days of his long career right up through his latest work might not have been what many in attendance were expecting out of the 75-year old performer, Macca smashed those expectations and steamrolled on with the finesse and the drive of a real seasoned pro, which is exactly what he is.
Without the aid of an opening act, Sir Paul and his four-piece band walked onto the massive, darkened stage to thunderous applause and wasted no time jumping head first into the night’s barrage of hits. Spry, slender and fit, Paul donned a dark blue blazer, white button up shirt and jeans and looked comfortable and ready and prepared for the long night ahead. The familiar opening chord of Beatles classic “A Hard Day’s Night” struck and, again, the rafters shook as every single person in the place stood and cheered loudly. 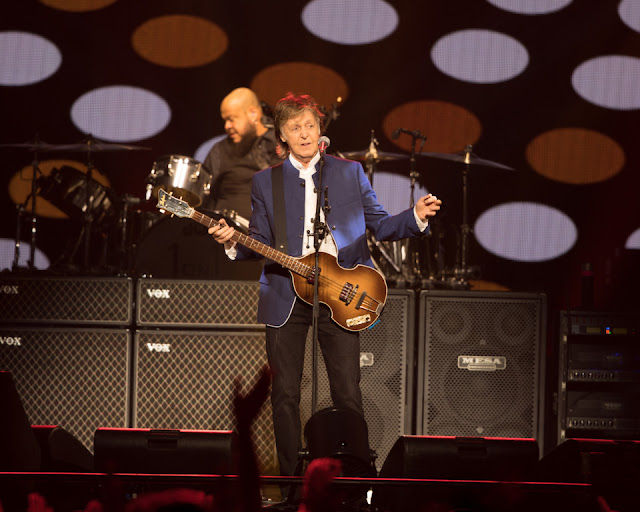 Two giant screens on either side of the stage and projected larger than life images of McCartney while colorful, geometric shapes danced on the screens at the rear of the stage. If ever there was a moment that perfectly conjured a celebratory mood, it was this opening number.
Seated nearby was ex-Hootie and the Blowfish lead singer Darius Rucker and his family who were all feverishly snapping photos of Paul on their phones and singing along to the lyrics.
Trotting around the stage, shooting peace signs and thumbs up to fans in all levels and in all sections, he somehow gives off the vibe that he’s damn glad to be there.
With every intention of pleasing everyone in the house, McCartney somehow touched on every era of his career. He turned in a sizable amount of Beatles tunes, represented his 70s output with Wings and played plenty of latter material too. 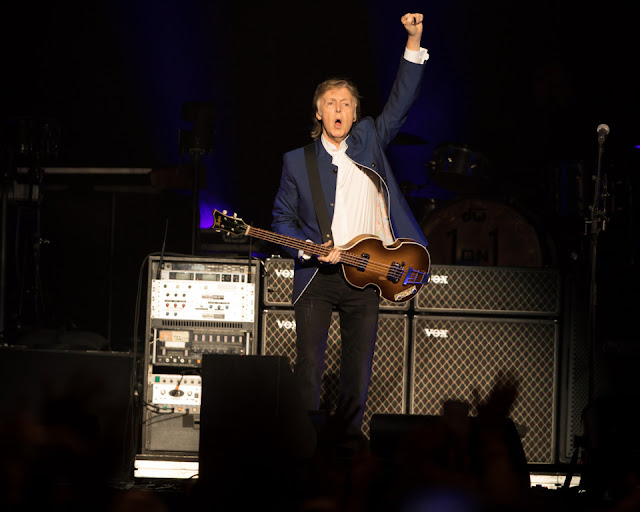 After a rousing version of 1974’s “Junior’s Farm,” Paul called for the house lights to be brought up. “This is so cool. I’m just going to take a second to drink it in,” he said as he scoped out the arena and eyed the whole crowd.
Nearly as entertaining as the music were the short, comical and sometimes poignant anecdotes Paul threw in between songs and as intros to some, including recalling a quirky mishap that occured last time he played in Tampa in 2005 when he fell into an onstage piano pit. Or the fond recollection of the late Jimi Hendrix’s live performance of “Sgt. Pepper’s Lonely Hearts Club Band” in 1967 he witnessed a few days after the album’s release. In turn, he closed out an absolutely stellar version of the deep Wings album cut, the slow-burning, guitar-heavy “Let Me Roll It” with some passages from Jimi’s “Foxey Lady.
Switching from his famous Höfner bass, to a cranked up colorful Gibson Les Paul guitar, to a grand piano, an upright piano to acoustic guitar, there wasn’t much Paul didn’t play during the marathon show. He even whipped out a ukulele and delivered a loving, heartfelt tribute to George and revealed what an accomplished uke player he was. “He even gave me this one” Paul said as he held up the tiny stringed instrument. And, with that, he paid George the ultimate honor by performing “Something”. One of the night’s many lump-in-the-throat moments came during the tune as vintage photos of Paul and George washed on the screens behind him in what turned into a spirited sing-along.
Paul threw in the romantic “My Valentine” from his 2012 album Kisses On The Bottom. 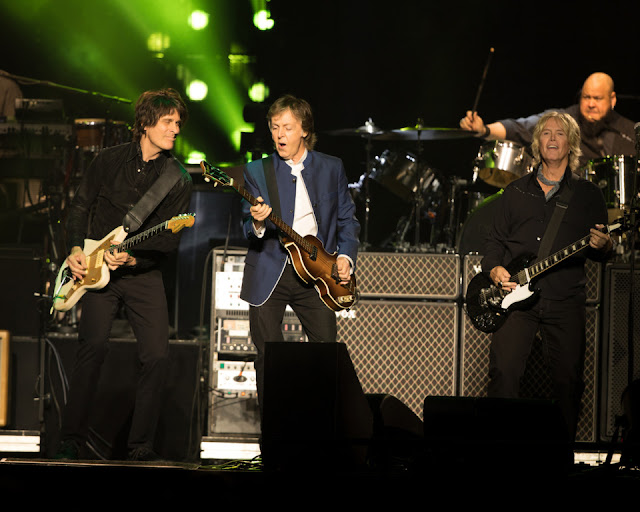 In an absolute wow moment, he introduced “Temporary Secretary” from his 1980 McCartney II album, “I Wanna Be Your Man,” a song that Paul introduced with a charming story about taking a cab ride with songwriting partner and bandmate John Lennon along with Rolling Stones songwriting duo Keith Richards and Mick Jagger many moons ago. John and Paul gave the song to the Stones to record and it was their first no. 1 hit, he remembered.
As he began a version of “Blackbird,” Paul recalled a different time when the civil rights movement deeply affected him and how he’d hoped the song would inspire people in places like Arkansas and Alabama to maybe take the song’s message to heart. And, with that, the platform he stood upon rose twenty feet in the air and lifted him high above the stage he’d just stood on. His message and his song were played as he rose in the arena. Another of the night’s many moving moments.
And, just like he began and just like he carried out, the end of the night was another non-stop frenzy of great songs and sigh-inducing moments that conjured tons of warm fuzzies and spontaneously caused goosebumps among many in the crowd…myself certainly included. 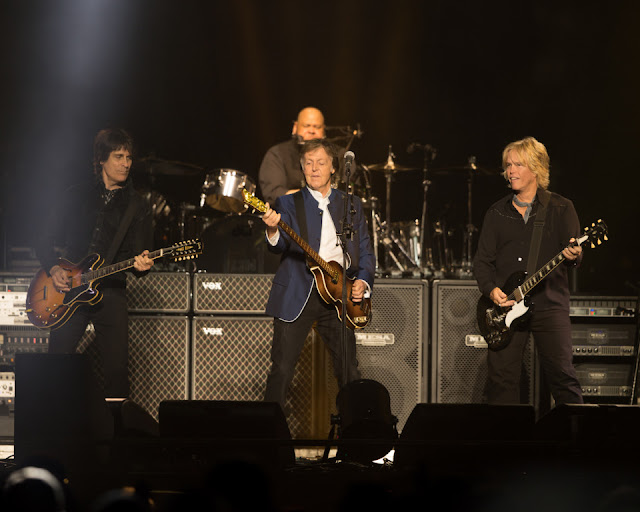 “Live And Let Die” and an emotion-filled rendition of “Hey Jude”,as the returned to the stage for the night’s powerhouse encores, each held a flagpole and waved their respective flags joyously before picking up their instruments again. An American Flag, a British Union Jack flag, a Florida flag and a Pride flag were all represented.
Winding up with a kickass version of “Get Back” (along with a local Lakeland mom and son team who Paul invited to dance onstage) with the suite of “Golden Slumbers”/”Carry That Weight”/”The End” was fitting. “We’ll see you next time,” Paul shouted before vanishing from the stage.
SETLIST: 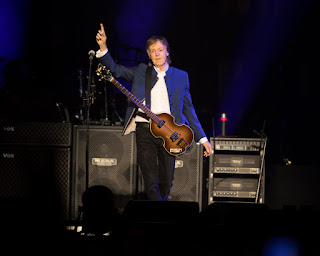 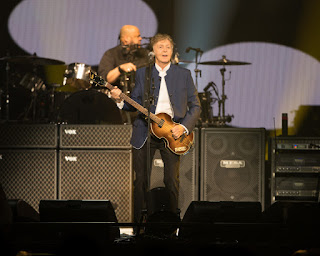 Blackbird
Here Today
Queenie Eye
New
The Fool on the Hill
Lady Madonna
FourFiveSeconds
Eleanor Rigby
I Wanna Be Your Man
Being for the Benefit of Mr. Kite!
Something
Ob-La-Di, Ob-La-Da
Band on the Run
Back in the U.S.S.R.
Let It Be
Live and Let Die
Hey Jude
—
Yesterday 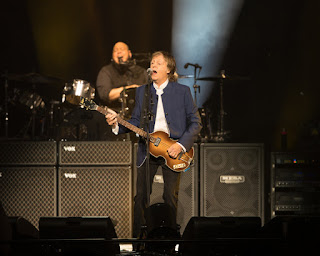 A FREE BACK-STAGE TOUR WITH THE CIRQUE DU SOLEIL