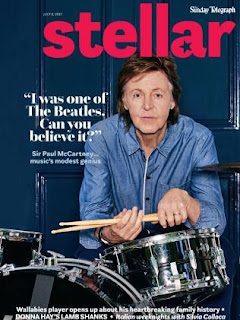 “You see a lot of humanistic scenarios in the audience — people crying, laughing, singing along. The fact that the music can bring a whole family together is pretty cool.”
McCartney’s whole family now stretches to five children and eight grandchildren.
Daughter Mary followed her late mother Linda into photography — she shot her father in his London home for today’s cover of Stellar.
“She knows how to make you look good,” McCartney says of the never-seen-before images.
“Of course, instead of it being just anyone, it’s my little Mary. Well, she was my little baby, now she’s a hard-working mum with four kids. She’s a really good photographer. She can boss me around: ‘Don’t do that, stop, stand up, gimme a smile.’ She’s my favourite photographer.”
Paul and Linda had four children: artist Heather, 54, photographer and cookery writer Mary, 47, fashion designer Stella, 45, and musician James, 39.
The singer’s six-year marriage to model and activist Heather Mills ended badly (it’s his only no-go area when being interviewed), but resulted in his youngest child, 13-year-old Beatrice.
McCartney wed New Yorker Nancy Shevell in 2011; they’ll celebrate 10 years since their first meeting by travelling together to Australia for his tour.
While McCartney tops every “wealthiest musician” list, Shevell, 57, is no slouch herself, maintaining a nine-figure family transport fortune.
“Nancy’s very impressive. She is a businesswoman, she still runs her dad’s trucking company with 4000 trucks,” McCartney says proudly.
“She’s a trucker. She’s used to men’s humour. She’s a beautiful, smart and funny girl. She loves music … We’re very happy together.”
Most of McCartney’s children have adopted the vegetarian diet and animal rights beliefs that Paul and Linda were celebrity pioneers of back in 1975.
“We were on a farm, it was lambing season, and we were eating lamb. It suddenly clicked, ‘Maybe we don’t want to eat this anymore?’” McCartney recalls.
“It’s a style of life that I like and it’s always done me good … and a bunch of animals good, too.”
Aside from music, vegetarianism is one of the McCartneys’ major legacies; a chain of meat-free food options still bears Linda’s name.
“Most people are animal lovers,” he says.
“When you go vegie you become more aware of animal cruelty. Linda was very cool with it; she’d talk in a way that didn’t put your back up and she’d persuade you that these animals should be saved. She had such a good way about her that people would accept it, rather than getting into a big argument.
“We were able to do a lot of animal rights work — you feel good about that. I live on a sheep farm and the sheep die of old age. That never happens — they never reach that age, but my old lot do. It’s a nice feeling.
“We share this beautiful planet with all these other creatures. My idea is, why not give them their shot? Then you get the environmental angle which is very important these days, particularly when you’ve got someone like Trump who thinks it’s a hoax.”
Last year, McCartney copped flak from his Republican-leaning US fans when he was photographed with Hillary Clinton. As someone who divides his time between the UK and US, he doesn’t mince words when asked about Donald Trump.
“I’m not a fan at all,” McCartney says.
“He’s unleashed a kind of violent prejudice that is sometimes latent among people. Most people don’t feel it’s OK to be like that. When there were protesters at his rallies, Trump would say, ‘Oh beat them up, give them a good punch’ — wait a minute, I’m not sure that’s cool for a leader of a country to be saying that. Maybe for a hockey player.
“He’s unleashed the ugly side of America. People feel like they have got a free pass to be, if not violent, at least antagonistic towards people of a different colour or a different race. I think we all thought we’d got past that a long time ago.”
At 75, Paul is two years younger than the other remaining Beatle, Ringo, and just over a year older than The Rolling Stones’ Mick Jagger and Keith Richards.
“When I was a kid I’d look at someone who was 75 and think, ‘Bloody hell, that’s old,’” he laughs.
“But you get to 40 and you think, ‘40, that’s old.’ Then you get to 50 and think, ‘Well, 40 wasn’t so old.’ As you go on you look at the decade before and think, ‘I thought I was old then, but I wasn’t.’ Now you look at people the decade ahead of you and think, ‘Well, he’s still pretty cool.’
“I enjoy very much what I do: I feel healthy, I’m having a good time, making a new record, going on tour. It’s my dream come true. It’s what I always wanted to do when I was a kid. I’m still allowed to do it, so I’m not complaining.
“I belong to the group who think age is just a number. As you get to my age you’re inevitably aware of your mortality and you start thinking, ‘What does that mean to my kids and my grandchildren?’ But I’ve always taken the same attitude: when my time is up, that’s it. Until then, I’m going to have a laugh.”
Paul McCartney’s Australian tour starts in Perth on December 2.

ON THIS DAY IN BEATLES HISTORY